As much as he may at first appear to be an unlikely kind of hero of mine I cite this man as being one of the most important figures in the world of music and fashion in the 2ndhalf of the 20th century.

The man here is Malcolm McLaren. And there is one primary message that sings out from Mclarens career; Music sells fashion and fashion sells music.
Mclaren outside Sex 1976
Malcolm McLaren today is probably best known for two things being the long term parter of Vivienne Westwood and also for being the manager of the sex pistols, although he infact did much more to change the shape of fashion and music. 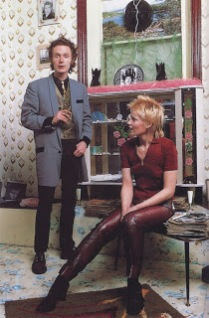 Two amazing pics of Vivienne and Malcolm in 1971. They are sat in the shop at 430 Kings road when it was “Let it Rock”. Note the 1950s cabinet in the background- At this time they were selling a large amount of 1950s clothing and memorabilia, interested in the teenage rebellion of the time.
McLaren and Westwood were more than a couple. They were in fact a brilliant business team, and I think it is often forgotten that Mclaren was as much a part of early Vivienne Westwood (up to around 1983) as Westwood was herself. McLaren often pushed Westwoods creativity and he was a complete “ideas” man. Nothing was too crude or too controversial in his mind. Although, as he often said post his collaborative work with Westwood despite the punk asethic; ripped, torn, worn of what they were doing the pieces were often beautifully made with the highest quality fabrics used. Early pieces from let it rock were handstitched, and there was a certain craft, bricolage element to what they did. It is interesting to note that some of Westwood’s least successful collections were those in the first years after hers and McLarens partnership ceased, which really shows the power he had over her designs. 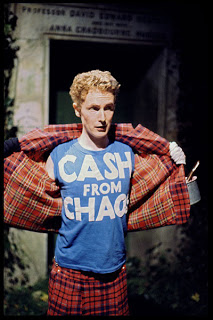 McLaren in 1976- John Tibieri
This is one of the most controversial garments produced by Westwood and one which she was actually against. McLaren claimed it was “ok” as he was Jewish. 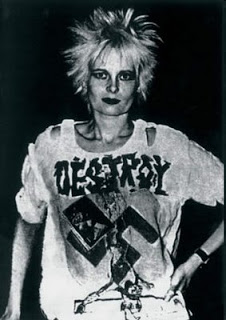 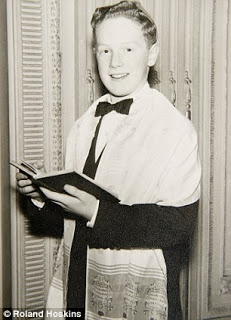 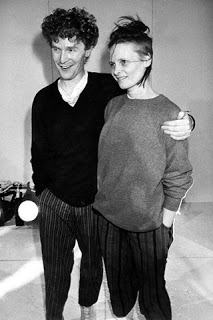 Two of my all time favourite pictures of the couple in 1981. I’m never sure why i love these two pictures so much. They look so relaxed at ease, and almost like a normal couple.
One of the things McLaren was so great at was branding, and creating the “image”. Supposedly he created the sex pistols in order to sell more of his and Vivienne’s t-shirts in their shop Sex/ Seditionaries (the sex pistols period saw an overlap of the two shops). Sex pistols contrary to their rebellious aesthetic were in reality one of the first “manufactured bands. The members all hung out at the shop ran by McLaren and Westwood at 430 Kings road, and Johnny Rotten was recruited to become part of the band after being spotted sporting green hair and torn clothing.
McLaren suggested that the sex pistols (despite a number of hugely influential singles) were simply a publicity stunt, and most of the things they did were for effect. Notably, their signing of a record contract in 1977 outside Buckingham palace.

I’m always intrigued that in 9 out of 10 cases the policeman is cut out of this image. Maybe in an attempt to seem that the Sex pistols act of signing their contract outside the palace was more rebellious than it infact was? 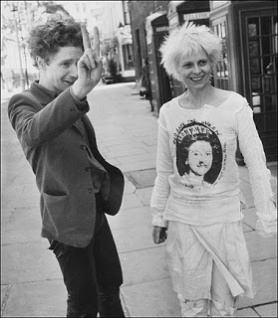 McLaren and Westwood in 1977. Westwood sports a God save the Queen t-shirt and bondage trousers.
The sex pistols were not McLarens only musical triumph, he also managed Adam and the Ants, Bow Wow Wow and provided stage costumes for the New York Dolls. Bow Wow Wow, helped to really promote the New Romantic aesthetic and again it has since been said that the brand only existed in order to promote Vivienne’s clothes. There are some wonderful images of lead singer Annabella Lwin in Vivienne Westwood clothing- mostly from the pirate collection of  1981. 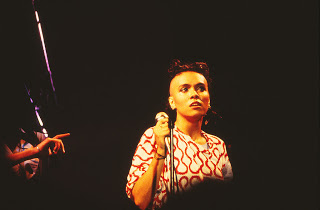 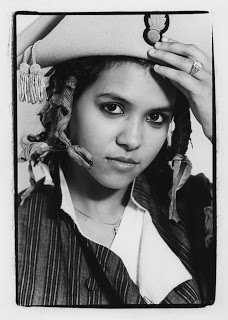 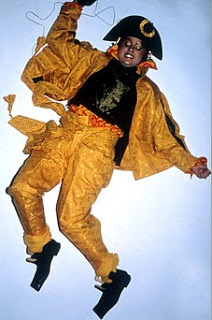 Annabella Lwin 1981 and 1982
McLaren is also often credited with helping to bring hip hop to a wider audience in the UK with the group the world famous supreme team. I highly recommed a watch of the viedeo for the song “buffalo gals” which sees a group of girls in the background dancing in Vivienne Westwood’s 1982/83 collection Nostalgia of mud (also known as buffalo girls).  Demonstrating yet again McLaren’s ability to use music to sell fashion.

McLaren with models and the World famous supreme team in 1983
Post musical career though McLaren continued to influence. When watching many a mainstream programme on fashion history McLaren often pops up (partly I believe because he is such an enigmatic speaker). I highly recommend the series Undressed: fashion in the twentieth century In which he speaks exstenively about fashion history (1998).
I’ll leave you with a few particularly insightful quotes from McLaren
“I have been called many things: a charlatan, a con man, or, most flatteringly, the culprit responsible for turning British popular culture into nothing more than a cheap marketing gimmick. This is my chance to prove that these accusations are true.”
“My intention was to fail in business, but to fail as brilliantly as possible. And only if I failed in a truly fabulous fashion would I ever have the chance of succeeding.”