Back in May my lovely friend Holly asked me to shoot a few pics of her in some of her fabulous vintage dresses. Now, I am by no means a photographer, but I certainly enjoy taking some amateur snaps from time to time, I am sure over the coming months I will share more of these images, but today just one set featuring Holly.
Holly, like myself is a big collector of vintage, and her personal penchant is for California cottons. Here is Holly in one of her lovely California dresses.
Between the two of us we have not been able to ascertain too much information about the brand, apart from that it had roots in America (it looks like it might have been part of the larger conglomerate “The Great American Dress company” ), and dresses by the brand were being produced both in the UK and in New Zealand  It is interesting, though that the CC label is more often found in the UK than it is in the States.

There are a number of ad campaigns that feature California cottons to be found on the net, and most of these have an intriguing mix of American settings but using British models. The brand also had a tie in with the “max-factor” make up company.
On the day of the shoot there was a particular dress that we were both interested to shoot. This little number that fits Holly like a dream. 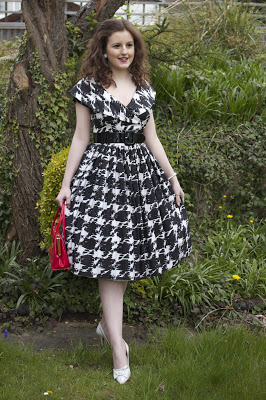 The dress features in a 1960 advert for California cottons. This whole series of adverts show both the continuation of 50s shape dresses into the 1960s and this America meets England aspect I mentioned.

The dress is modelled here by Henrietta Tiarks.
Tiarks is an interesting character, who I did a little more research on for one of my masters essays. Henrietta was a debutante, and “came out” in 1957. But Henrietta was more than your average debutante, and in 1957 was crowned “deb of the year”. Considerable press coverage surrounded debutantes at the time, and Tiarks epitomised the fresh face youthful ideal of the debutante. Brigid Keenan has suggested that in the period newspapers gave debs “star treatment”, and Tiarks is no exception. 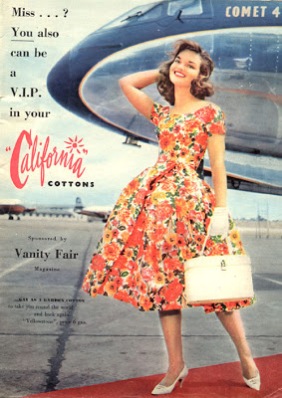 If anyone does have any more information on the California cottons brand do drop myself or my friend Holly a message!