Over on ebay this week I have some FABULOUS items listed but the absolute gem has to be the Biba cardigan suit I am offering.
Now 70s isn’t normally my thing, but as I said before when I was selling a fantastic Alice Pollock dress, I sometimes make exceptions, and this is one of them ( Actually I’ll be honest I’m getting more and more into 70s stuff all the time)

I’ve done quite a bit of background research into this wonderful suit and have been able to date it to 1973 after finding some amazing original images!

The first image shows just the skirt, I found this online on Helga Von Trollop’s wonderful blog, I don’t have the original reference for it but I believe this was in one of the Biba books. Doesn’t it look fab? And also show her versatile it is.

The second image is the really exciting one, this is by photographer Brian Duffy, who took some of the most iconic shots of the 60s and 70s. He was the photographer for David Bowie’s infamous album cover Aladdin Sane in 1973. The photograph here features Jean Shrimpton and Barbara Miller and you can see Shrimpton in the background wearing an example of the suit I am offering for sale! I wish I had the hat too. That would be rather amazing. This image featured in the Telegraph in 1973 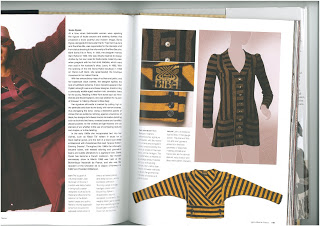 This suit is evidently an important ensemble, an example of just the jacket features in Marnie Fogg’s book vintage knitwear which was published a few years back (an excellent read, I highly recommend it)
This is a truly fantastic example and typifies the style of Barbara Hulanicki’s designs.
The Biba chevron design stripe like this was hugely popular featuring on everything from tops to skirts to jumpsuits. I really like the deco 30s look to the design, again typical Biba. As this dates to 1973 it would be pre the Big biba store, and would have come from when Biba was located on Kensington high street.
So what else can I say? Rather than buy a modern Biba from house of Fraser why not have an ORIGINAL 70s one!
You can find the suit here on ebay.
This week I’ve got lots of lovely things listed including a sensational Horrockses evening dress and a lovely polka dot CC41 dress too.