A few weeks ago I did a talk about fashion during WW2 and whilst researching for it I  came across this amazing piece from Vogue November 1939 (i had scanned it whilst working at Hampshire Museums service and forgotten I had it!) Not only is it very informative as to attitudes towards war, but also the writing style is incredibly interesting. As someone who studied English at A-level I couldn’t stop myself from “lexical device spotting” as I read it.

Fashion meets the challenge of war
London, all set in September for a fresh fashion season of wasp waists and fragility, now, with the brilliance of an acrobatic somersault, turns a new fashion face towards the future. There’s immense chic in restrained evening elegance. There’s immense charm in the robustness and shrewd common sense of day clothes. New factors-new fashions. Playtime hours are 5pm to 11pm instead of 8pm to 2a.m. The Berkley has launched tea dances (shades of 1916). Afternoon dresses and hats are booming. Not black, with khaki- which conditions colour as clan tartans at peace-time balls. Besides, we’ve had enough black with black-outs. Instead raspberry, prune, cocoa and sage.
Cut off from the continent, isolated in our island, we have suddenly swung round to continental technique and, in London, dress more like Parisians than ever in Paris…For restaurant dining and dancing, we’re women of the world. If we dress at night, we dress down. Bright wool for warmth; jersey in silk or wool- supreme among fabrics- clinging to throat, wrist, ankle. Each diner dress with its own short jacket. Already a picture gown looks as démodé as a picture hat.
Town clothes tend towards the tweed end of the fabric scale. Nutria replaces Persia lamb. Coats are caught to swallow up suits without trace; loose sleeves, loose backs. Suits have an air of imperturbable ease. They don’t look lost the moment they leave town. They don’t look like country cousins up for the day. They are tough but not rough; chic but not slick.
Country clothes look as if at any moment they might bestride a bicycle, or walk over the hill to see a neighbour.
In town we walk- not totter, but neither stride- in solid-soled square heeled shoes; the curse has been taken away from the word “sensible” Shoes are built for business- and have therby acquires an integrity denied to the skeleton sandal of the summer.
Hats have put away foolishness- and fit. It’s part of a campaign for common sense- as distinct from dowdiness. A flighty hat, tugged by the wind, is as incongruous in town, with gas mask satchel and flat shoes, as it ever was in the country. Even fur hats (lively survivals of the pre-war mode) clasp the head with snoods.
We must have warmth. There is nothing so plain as a bluenose. We keep snug, even when fuel is rationed, with fleece line ankle-boots, cosy hoods, fur mitts, coddling the extremes.
“Fashion, like the woman it clothes, is proving no good-time girl, thrown into confusion by the shock of war, but a staunch support, an invaluable ally”

Today is an opportunity for a sneaky peek into my personal collection. In the last few months I’ve gone a bit mad on Horrockses dresses, my collection has been pretty large for a while now, but within a short while I have added five more to my collection, all which add something a little different I feel.

This is Horrockses number one, and is probably the latest of all the Horrockses I bought. With this label it is most likely it dates to post 1958. I don’t normally buy Horrockses in this style although I thought a corduroy Horrockses was a must as dresses such as they often appeared in Vogue during the winter months. 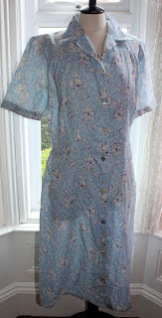 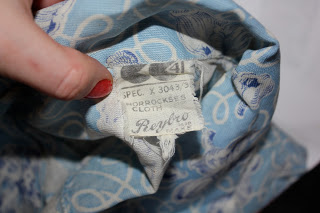 Here is Horrockses number two and one I was particularly excited by. This little number is actually earlier than I ever normally buy Horrockses wise and predates the launch of Horrockses fashions in 1946. This dress infact combines two things I collect as it is also a CC41 dress. What is good about this dress therefore is it can be dates quite easily between 1942-1946. Although it predates Horrockses fashions it still has an iconic Horrockses print which makes it a great addition to my collection. 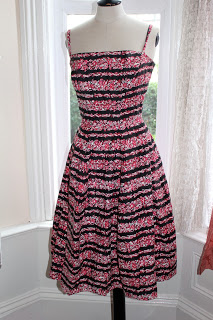 This is Horrockses number three and is so typical of my Horrockses collection in a wonderful biadere stripe design. This is almost certainly a mid 50s example. What I like about this is that it also has a Richard shops label demonstrating how Horrockses primarily sold through concessions in department stores.

Horrockses number four and is probably the most show stopping of all I recently purchased. This is more of an evening dress, and what this really reminded me of was Matisse’s cut out designs.
This lovely dress was purchased from Scarlet vintage. Check out the website or visit the shop in Bath, AMAZING stock. 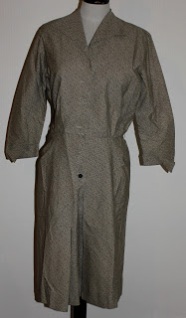 And finally Horrockses number five. At first this appears the most unremarkable of all the Horrockses I have purchased, but is infact probably the most important. This amazing example can be EXACTLY dated to 1953 as the dress was produced as a special souvenir for the coronation. If you look closely you can see “Elizabeth Regina 1953” printed all over this lovely dress. So not only is it a Horrockses, but with the Queen’s diamond jubilee coming up it is a highly relevant dress too.
I hope you all enjoyed a little outing into my collection! 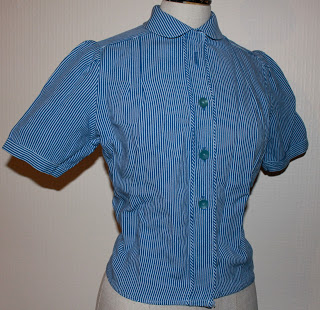 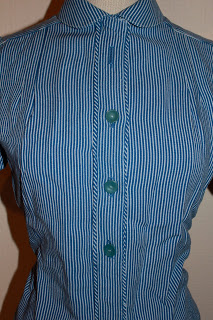 Today I am dedicating my blogpost to one little item. On first glance you are probably thinking it’s just a simple blue and white striped blouse. A vintage item most probably (this is me after all and it is highly unlikely to be modern), but this blouse is much more than it at first appears and also helps to tell a story about an important period in Britain’s fashion history.
There is one small label sewn into the side seam of this blouse which makes all the difference: A cc41 label. What I really like about this blouse is that it shows so many of the restrictions in one item. 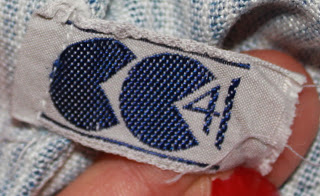 First off (although difficult to tell by my picture) the blouse is really quite short. Now whilst the length of a blouse was not rationed many manufacturers made garments that were designed to be tucked in to quite a short length to save on fabric. When looking inside the blouse you can also see how tiny the hem is, again a fabric saving device. All of the seams in the blouse have very small seam allowances as is illustrated in the pictures, and again was a necessary fabric saving device. 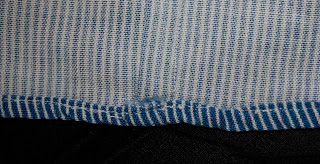 Next is the collar (I’m a sucker for a Peter pan collar any day of the week). One of the rulings under utility was that a collar could be no deeper than 5” as illustrated here, this is a very short collar!

If you look at the sleeves you can see how they have been made to look like turnback cuffs, yet the “turnback” is actually a strip of fabric stitched on as turnbacks cuffs where strictly prohibited. The sleeves also do not have any buttons- this would make it easier to get into the blouse, but restrict the amount of buttons that could be used elsewhere, hence why there aren’t any. 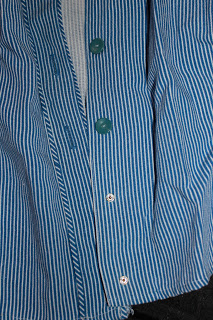 I think the most canny part of the blouse though is the centre front button fastening. Under Utility restrictions a blouse with full length sleeves could have up to 7 buttons, whilst one with short sleeves was restricted to just 5. This blouse originally had just four (currently 3 as one is missing) and the rest of the blouse fastens with poppers. Two at the bottom of the blouse and one for security at the neckline. I feel that the ones at the bottom of the blouse actually act as a really good design feature, if you are tucking the garment in you would not have the added bulk from the button showing through your skirt.
And, whilst researching into utility I also found out something rather interesting about the manufacturers labels themselves, they could have “no more than one name tab and one drop ticket in addition to the size tab and utility label.” This blouse has its manufacturer label and then details about the fabric “moygashel” on the same label. It is interesting to consider how in 40s garments these details would often be on two separate labels, but under the utility restrictions only one label could contain all of these details. The smaller label underneath is the utility design no. which all utility items should have. 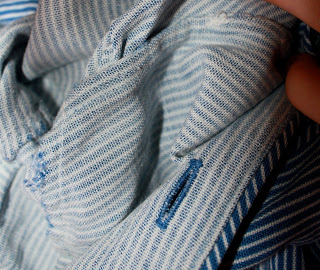 And on another note some may be wondering what is this mystery fabric moygashel? It is a particular type of linen fabric from the area of Moygashel in Ireland, it is quite a strong hard wearing fabric and was particularly popular during the 40s 50s and 60s before falling out of favour. I have to say that the vintage moygashel garments I have come across all seem to be particularly hard wearing and also they retain their colours rather well.
The label also states that it has “tubernised fused parts” (it too me a while to work out what this word actually said) basically this was a finish that helped garments to look “fresh and clean all day” and reduced the need to starch or boil your garments (in particular this finish was used for men’s starched collars.
So all in all a very interesting little blouse, and what is even better. I am selling it! Find it over on my ebay here. I’m selling a lot in the next few weeks and months including some amazing vintage Biba and Alice Pollock, so do keep having a look.
If you want to know more about Utility check out some of the restrictions here, http://cargocultcraft.com/knowledge/wartime-austerity-restrictions-on-british-clothing/womens-and-girls-wear-dresses-jumpercardigan-suits-blouses-skirts-and-slacks/ it really is an invaluable resource. Or, have a look at my previous post on the topic here.