Yesterday I was lucky enough to be invited along to a special bloggers Q&A session with the legend that is Barbara Hulanicki. I’d met Barbara once before, back in 2010, but yesterday I had the chace to ask her some really indepth questions, along with the rest of us that were there. It was just a small group of us, so it meant the opportunity to ask question after question!
For the event I wore one of my original pieces of vintage Biba. The bright yellow blouse I wore has the best sleeves of any garment I own. I teamed it with my fail safe Freddie’s of Pinewood jeans (Freddies I LOVE YOU…that is all) and some Miss L Fire platforms. On arriving Barbara complimented me on my blouse and told me that a version of my blouse had appeared in the first mail order catalogue! I knew it was quite an early number…but I was surprised it was that early!

I spent the session furiously taking notes, so have tried to roughly (Very roughly…it’s not exact by any stretch of the imagination, I’ve just tried to reform the notes so they are coherent) transcribe all of the questions that came up, I hope it is as interesting for you as  it was for me and my fellow bloggers. 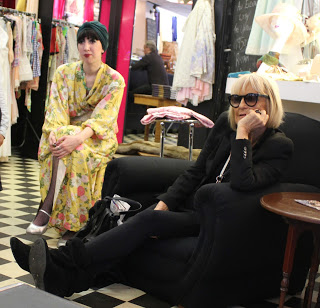 Massive thanks to Sophie (sat next to Barbara here!) for organising the event!!! 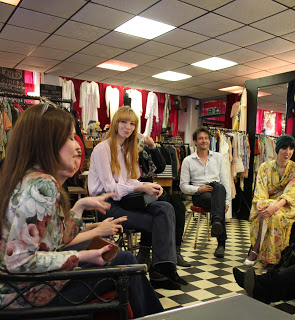 Q: How do you feel about the fact that so many of your garments have ended up in museums?
A: Surprised, because no one took us seriously, they bypassed us. Honey and 19 paid attention to us at the time, but not others. My Husband would have been so pleased. I can’t believe people are selling it for so much, we must have made 3 million garments.
Q: What sort of fabrics did you like to work with?
Fabrics then were non-stretchy. I really liked working with rayons, particularly Burgess Ledward (I think) in Leicester. We bought someone out of retirement to make our fake crepe de chine. Fabrics with good drape were important. We used old fabrics too, particularly from three stores Derry and Tom’s, Barkers ( I think) and Pontill’s (?). We found the old fabric buyer at Pontill’s and opened up the old fabrics. Some had areas of fading but we cut them out.We found lots of old moss crepe fabrics there.
Q: Where was your inspiration coming from?
Old films. Garbo, Dietrich. Anything modern didn’t really appeal. We didn’t have anyone to knock off, because we didn’t like anything much that was around. Every young generation is doing their version of what they think each period is. We were looking back at the 30s and 40s and doing our version of it.
There were lots of film/ music links with Biba and the Big Biba store was closely linked with the glam rock movement.
Suzie Quattro filming one of her videos in the big Biba store was particularly odd. I Remember walking past and seeing her jumping on thee mirrored platform. The song was perhaps not appropriate for the setting of the shop, but it was an interesting contrast.
The video Barbara mentions is Devil Gate drive;

http://www.youtube.com/watch?v=xvVr8oqkFqo
Q:Who was the best person that wore your clothes?
The New York Dolls. O loved them. We caught stealing in the communal changing room. In one of their videos one of them is wearing a spotty Biba blouse that they stole from the store. They were so elegant, so well made up.

It was easy because it was almost all one size. One person who came to work for us said we had to do a size 12, and it just didn’t sell. (At this point Liz Egleston mentioned that a dress she owns in maternity and normal Biba are exactly the same!).
We found American girls couldn’t get into the clothes, British girls didn’t work out, they ate barely any meat. The American girls were a different shape,  they couldn’t get their arms in the dresses or do up the boots.
Q: Who would have been your ideal customer?
Audrey Hepburn. She wore some of our high waisted things. That is who I had in mind to wear my clothes. (note: This made me think about the gamine, elegant, slender woman. Perhaps not the face you would imagine for Biba, but definitely the body!) She was the first young person who went into a coutre house and got Givency to make amazing clothes. When i was young you couldn’t get those clothes. I was so inspired by her, I wanted shoes just like her, I went round Brighton looking and looking for similar shoes, I cut up a pari to get the same look. They didn’t last! In that time you couldn’t get anything unless you made it yourself.
Q: Do you live in a dramtic way?
No!
Q: What was your inspiration for the interiors?
We were stimulated by films, but wanted it to be like someones glamorous living room. When we started people could buy vingtage furniture cheaply, art deco, art nouveau. We didn’t like a lot of modern stuff.  We had amazing stuff made for Big Biba, mirrored stuff, wallpaper, Egyptian furnitre. A lot of it was made by film studio people, we were very influenced by Disney. 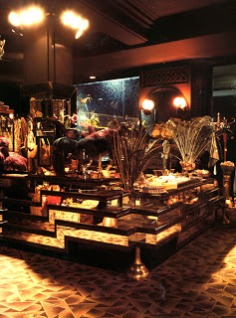 It was all panned from the outset, and it was actually quite cheap. Only £¼ million for six floors for the refit. It was all assembled in the shop.
Q: Could it work again?
Yes!
Q: What did you feel like as a woman in business?
There was TREMENDOUS sexism (Barbara bought up a number of examples, but spoke too quickly for me to take proper notes!) To begin with no one took us seriously, bottom pinching, reps, people in the factories.  It was really upsetting at the time.
Q: Do you think Biba was an intimidating brand? Were people scared to wear Biba?
The English street is as brave as it comes. The top came to it (the street) because it wanted to be with the incredible crowd. It really was accessible to all, it was a really strong generation and we were the old ones! We were 28, those leading were 8 or 10 years younger.  I didn’t have an age group in mind, But I hated those “can I help you” shops that we have now returned to. Lert the customer shop for themselves.
I used ot love Woolworths where you could help yourself with all the pick and mix.
Did you keep anything yourself? Not even an eyeshadow?

No
We had complaints about EVERYTHING. Even when we had shut. One woman came up to me in a shop in Knightsbridge and said where will I get my tights to match my dress now?

Q: Did you use your own products?
Yes. Anyrthing we needed we put in the shop,baked beans, dog food!

Q: Did parent’s ever complain about the clothes?
Parents were very disapproving, but they never dared come into the shop. Manufacturers too were frightened to come in.

Q: Is it true that you had an area of the shop called shoplifters corner?

Yes, we labelled stuff up like that because it dodn’t sell. The problem is that people only shoplift things that is actually nice. All of the size 12 pieces we couldn’t sell ended up in shoplifter’s corner.

Q: Did you have a big problem with shoplifting then?

No, it was no more of a problem than any other shop at the time. Although we had a lot of publicity about it. For example, girls from Holland park school came in as a large gang. But the girls in the shop knew what they were doing, and would sense when someone was about to do something. The headmaster sent the girls from Holland park back in, and that’s why we got the publicity.

Q: What made you start the Biba cosmetics?

At the time everything was coral, you could only buy a lipstick in 20 or more shades of coral. The first lipstick we made was chocolate brown. Customers were bored of make up at the time. As it was so different the girls in the labroroatories were excited and we didn’t have to order such large quantities. The first lipstick that we made, the chocolate brown, was the only cosmetic we did to begin with and it sold out in under an hour. It was just a lipstick to start with, but we were doing something new.

Q: Was all the crazy coloured make up popular?

Everything was a silly price, so yes people did actually buy and wear it.

Q: Who was your favourite model you used?

Ingrid Boulting. Although Maddie Smith, who was one of the catalogue girls was very good too. She started off as a shop girl, alot of the girls who modelled for us did, as did Jo Dingeman and Stephanie Farrow, they were both very beautiful. 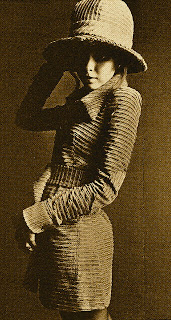 Stephanie Farrow shot by Hans Furer (Barbara did explain about this shoot, but I got a little lost in note taking at this point… I think there was another model who waid paid £1,000 but was not very good at all!) 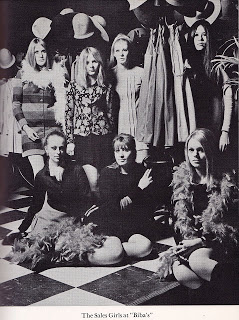 The sales girls at Biba

(this series of images come from a fabulous post by “Sweet Jane” http://sweetjanespopboutique.blogspot.co.uk/2011/07/is-for-appleb-is-for-biba.html)

Q: Did you get critiscm at the time for the Lolita range?

No. Not really. Most of the shop staff were only 15 or 16, everyone was just terribly, terribly younf them.

Q: What was the reception like to your designs at the time?

19 magazine was very important to us. It was only afterwards that the big magazines paid any attention. There was a sense of satisfaction, but still a “why didn’t you do it when we needed you to?”


Hopefully i managed to transcribe these notes relatively accurately, it’s not perfect but it gives you a rough idea of what Barbara had to say. It really was an amazing opportunity to have an in-depth discussion with such a fascinating lady who was so pivotal to the fashion scene in the period.

One thought on “Blogger Q&A session with Barbara Hulanicki”